“Jumpstart Science” – A great CLIL example, without being CLIL!

I don’t know how to start with CLIL!?

I don’t know how to start with CLIL!?

This sequence of activities looks like nothing special at first, but it was very important to me because it confirmed what I’d always thought about good CLIL practice – that it works best when the teacher can highlight (make salient) either the conceptual, procedural or linguistic aspects of the learning objective.

I was never really convinced by the word ‘integrated’ in CLIL. It seemed to me to be too vague.  Where is this so-called integration?

Show me an example! 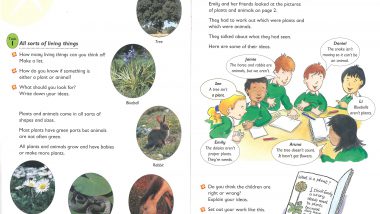 Well here it is.

This is from Rosemary Feasey’s ‘Jumpstart Science’ for Primary schools in the English National Curriculum.  It’s not even from a CLIL textbook, but for native speakers!  But that’s the point.

Feasey understands that young children need not just language support, but conceptual (what) and procedural (how) support too.  In CLIL, where we are more aware of the need for across-the-range support, this is surely what we mean by ‘integration’.  The dual-focus of content + language remains an abstract notion until you look at something like this.

The great elements of this page

What I love is the separation of these three educational ‘dimensions’ and the inductive nature of the tasks.

Look at the first instruction:  ‘Make a list’.   Instead of a boring explanation plus ‘Read the text and answer the questions that follow’ (agh!) Feasey just implies ‘You can do it’.  She treats the kids like intelligent human beings.

This procedural command leaves the field open.  Of course they’ll make mistakes, but then they’ll learn from them by the conceptual support she provides in the shape of the scientific information in the bullet-points further down, and the illustrations.  The kids check.  The teacher is largely irrelevant, which is how it should be!

Then the right-hand page turns up the linguistic volume, obliging the learner to refute the incorrect statements made by the six children in the picture.  At the bottom, she provides language scaffolds so that they can do this.    It’s a perfect sequence!

Every time I need some inspiration, I come back to this simple example.

Phil Ball works mainly for the Federation of Basque Schools, based in San Sebastián in Spain. He is a CLIL materials writer and teacher-trainer and has been closely involved with the award-winning Basque project, ‘Eleanitz’.  He has been involved in several European-based CLIL projects, and has written a wide variety of CLIL-based textbooks for the Basque and Spanish socialscience and English language programmes. He co-designed the new ‘CLIL Essentials’ online course for the British Council and works as a consultant for NILE.

He is the co-author of the new book about CLIL, ‘Putting CLIL into Practice’ (Oxford University Press 2015).

Search for other posts

Please log in again. The login page will open in a new tab. After logging in you can close it and return to this page.